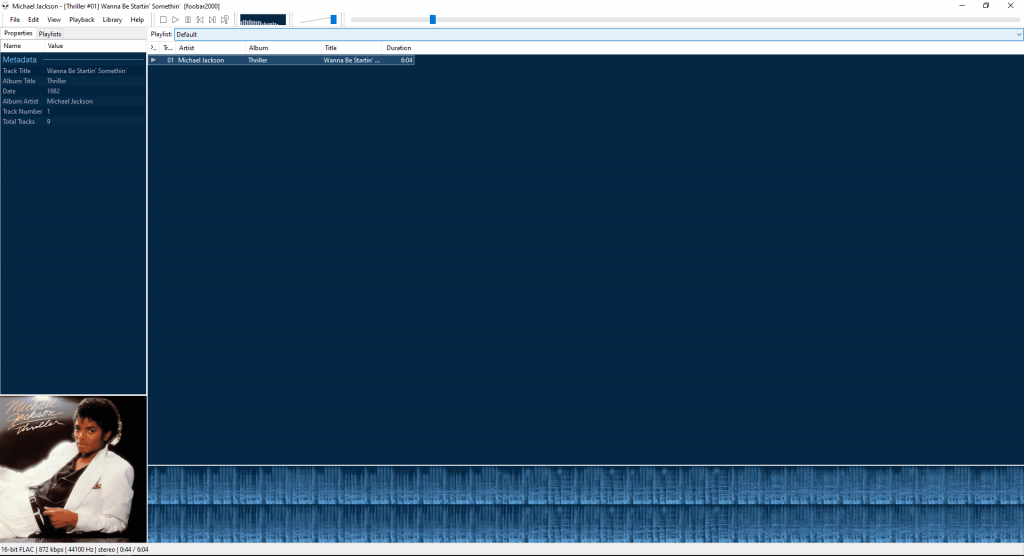 Foobar2000 is a freeware audio player for Microsoft Windows, iOS and Android developed by Piotr Pawłowski. It is known for its highly modular design, breadth of features, and extensive user flexibility in configuration. For example, the user-interface is completely customizable. Its extensive software development kit (SDK) allows third-party developers enough power to completely replace the interface. Foobar2000 supports a large number of audio file formats, has many features for organizing metadata, files, and folders, and has a converter interface for use with command line encoders. To maximize audio fidelity in cases where resampling or downscaling in bit depth is required, it provides noise shaping and dithering. There are a number of official and third-party components which add many additional features. The core source code is closed.

Foobar2000 also has a customizable user interface, advanced tagging capabilities and support for ripping Audio CDs, as well as transcoding of all supported audio formats using the Converter component.”

Ultimately what makes it fantastic its handling of source material naively and the fact that you can make it anything you like. When set up correctly it can replace any player you may have to date.

You can use foobar to rip and encode almost anything; it uses raw command-line sourced encoders which is the best way to encode properly.

The encoder pack includes every natively supported free encoder binary for use with the Converter foobar2000 component. The binaries are conveniently installed into a subfolder of the foobar2000 installation folder.

Foobar2000 makes use of  AccurateRip. It’s a database that allows you to find out if your CD rips are the same as those ripped by other people; if they were, then it’s likely the rips are truly error-free. The database stores checksums for ripped tracks in order to accomplish this. The checksums are generated when ripping and can be submitted to the database through the ripping software if the user so chooses.

This combined with Secure ripping  the process of making sure there were no errors during the extraction of audio from a CD by attempting to get consistent results from successive re-reads of the same sectors  makes Foobar your best choice for a music player below is a list of addons to help make foobar the best player out there it takes a tad bit more work then most player to configure but the reason for that is that the player truly is a blank canvas allowing individual users control over what they want and need with little fuss.

The claim that the encoding process is compatible with ordinary CD players (without audible distortion) is disputed: “Not being able to decode the peak soft limiting, a normal CD player will output distorted peaks”.)

some early digital recording & playback equipment, including CD players, used 14-bit converters, even though they were dealing with 16-bit audio. Some also used noisy “brick wall” filters to remove frequencies higher than the Nyquist frequency (22050 Hz). The resulting noise introduced by these converters and filters could be made relatively quiet by using pre-emphasis: boosting the signal (especially the higher frequencies) in the recording before it was put onto CD, and embedding flags in the disc’s subcode to tell a CD player to apply de-emphasis on playback. Some CD players even had a de-emphasis button that could be used to manually apply de-emphasis, but now it’s just a built-in feature of the analog outputs of nearly all dedicated audio CD players. By the late 1980s, pre-emphasis stopped being used because reliable 16-bit DACs with oversampling and other technologies minimized the conversion & filtering noise without the need for pre-processing the recording.

Most major-label CDs with pre-emphasis were manufactured in Japan in the early and mid-1980s. Relatively recent forum posts indicate that pre-emphasis is still used on newly manufactured CDs by some indie labels, mainly for classical titles.)

To get around this we use the previous plugin DSP effect IIR Filter File—> Open Audio CD –>Proceed To The Converter Set Up Dialog –>Processing –>IIR Filter, check ‘Enable Decode processing, IIR Filter should be in your list of available DSP’s, once it’s in the ‘Active’ box highlight it and configure, choose CD de emphasis  preset and leave sliders at default “disabled”setting,

Checks specified media files for decoding errors. Note that with most formats, its accuracy is limited to detecting errors that abort the decoding process.

No you have not gone Viral: It’s A Trap!