HomeCultureVolume One - Will You Master the Thing?
Culture

Volume One – Will You Master the Thing? 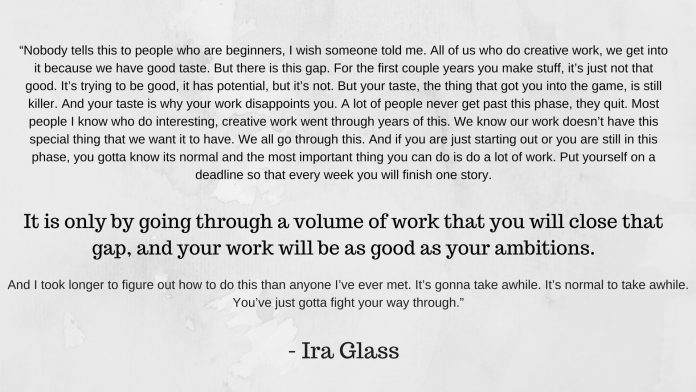 Can a Jack of All Trades become a Master of One?

“Nobody tells this to people who are beginners, I wish someone told me. All of us who do creative work, we get into it because we have good taste. But there is this gap. For the first couple years you make stuff, it’s just not that good. It’s trying to be good, it has potential, but it’s not. But your taste, the thing that got you into the game, is still killer. And your taste is why your work disappoints you. A lot of people never get past this phase, they quit. Most people I know who do interesting, creative work went through years of this. We know our work doesn’t have this special thing that we want it to have. We all go through this. And if you are just starting out or you are still in this phase, you gotta know its normal and the most important thing you can do is do a lot of work. Put yourself on a deadline so that every week you will finish one story.

It is only by going through a volume of work that you will close that gap, and your work will be as good as your ambitions.

And I took longer to figure out how to do this than anyone I’ve ever met. It’s gonna take awhile. It’s normal to take awhile. You’ve just gotta fight your way through.”
― Ira Glass

“Tell me about your personal interests.”

I wonder if interviewers see the beads of sweat that rise almost as fast as my pulse. It’s the closer question, the one they ask well after they have already made their decision. To me, this is the make it or break it question. They may have loved that take on corporate fiscal responsibility but if the answer to ‘tell me about you’ leaves them with blank stares or a quick “we’ll be in touch...” then there is not a chance in hell that I am landing that sweet corner cubicle by the vending machines.

The problem is, I don’t always know how I am going to answer the question. Every interview ends with a different answer, tailored specifically to that employer and what has already been discussed. Where do I even start? Do they want to hear about my love affair with karaoke and community theater, or do they want to know what book I am falling asleep with every night, or the books stacked up beside that book, ranging from manhwa to biographies to a textbook on ethnography.

Does it even matter? I haven’t read any of the books in months and have only ever finished two of them (it’s the manhwa, Bride of the Water God, to be exact) If I were to list all my personal interests I think it would only lead to the belief that I am a massive liar, or worse, confirm for them what I already know about myself. I am a full fledged Jack of All Trades, Master of None.

In the quote above, Ira Glass references the gap between when you start doing the thing and when you finally master the thing. The only thing I am a master of is Starting The Thing. The excitement and intrigue of embarking on a new task, or learning a new concept is incredibly addictive. There is a high degree of obsession involved and it is almost impossible to not pour all of my energy into The Thing. For about 6 months. Maybe a year, if I don’t run out of steam.

My major at least 4 times but I only have two years of University completed. I have started and then abruptly stopped studying 5 languages. In high school I joined as many clubs as possible for fear of missing out on the chance to try something new. I would be the worst player on the team, the quietest person on the stage and the least talented person in the band but I was happy because I was there and even if I sucked, at least I could say I did it. It was also fun as hell, and the concept of ‘boredom’ did not exist in my little world.

I had a serious case of FOMO and I knew it, I just didn’t care. It didn’t seem like a negative thing. Being a well rounded person isn’t a flaw and I didn’t need to be the best at The Thing, I was happy enough to be doing it at all. However, over the years the list of Things has become somewhat difficult to manage. Somewhere along the way I stopped being the worst player always and started being the best player sometimes.

The problem is, I have amassed a long list of skills that I have proficiency in, but none that are mastered. People with the single-minded drive to pursue one goal have always astounded me. It is a level of devotion and commitment that completely mystified me. It seemed ethereal and unattainable. You were born with it or, like me, you just weren’t. It wasn’t until very recently that it dawned on me that it had nothing to do with biology and everything to do with determination and self-discipline.

Somewhere in this web of skills and abilities that I have acquired, there must be one, or even two that are worth the gap. Being a multipotentialite is awesome, but it doesn’t mean never mastering one of The Things. It just means taking one Thing further than the others.

Welcome to Volume One.

(And by all means, leave a comment if this made you think of a random XOJANE post. There is so much naval gazing here that even I can’t stand my own writing at the moment. Oh look – I’ve fallen in the gap.)