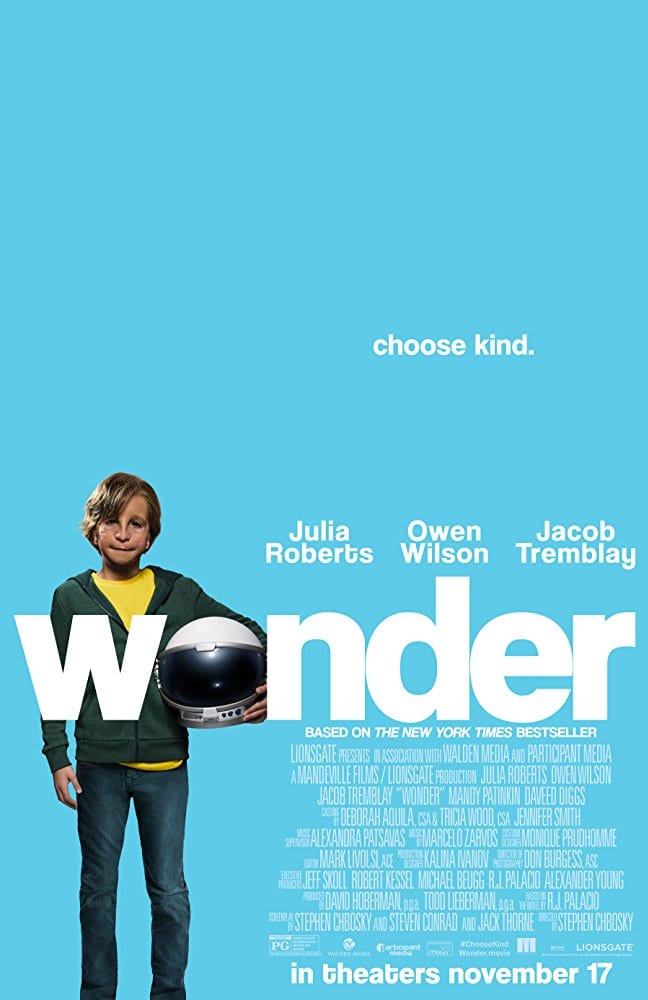 “Wonder” is 2017’s answer to family movie time, and understandably so. This empathy driven film is touching and thought provoking. With a story line that is easy to follow, a solid cast and a well-crafted script that sticks close to the original novel, it is an entertaining watch for children and adults. It also requires, in my opinion, follow up conversation. Auggie’s story is more than just a tale of a kid who is learning to overcome his differences, and it is more than a story about overcoming fear. It is a story about understanding that the more you get to know someone, the more beautiful they become.

It wasn’t difficult to choose a suitable viewing partner for this film. My youngest child had read Wonder and loved it enough to beg for a copy last Christmas. I suggested that we write this review together. My daughter is 9 years old. She goes into grade 5 next year and is in the same age range as Auggie, the film’s central character. She was incredibly excited for the opportunity but also insisted that we inform the readers that the parts in blue were written and typed by her. Her sense of authorship is not genetic, I swear.

Prior to watching the film, I had not read the book. Afterwards, I took the time to sit down and read the first three chapters. It was refreshing to see the tone and story line carried over with as much accuracy as was used. “It was better than the book because it had more (visual) detail and it added some extra stuff that I liked. Like when he got off the bus from something that his school did and he’s like “I got in a fight!” And his dad was like “Did you win?” That wasn’t in the book. And the book had some of the funny parts, but not all of them. One of the details they didn’t add, is when they told story of how he came to life. When the nurse comes in, it’s a nurse that always farts and whenever she brought her something, then the nurse would start farting and when she fainted, they thought that the sleeping nurse got woken up by the huge fart, “…the biggest, loudest, smelliest fart in the history of farts!” They didn’t add that in the movie. Although, in the book I like how they (used the) different parts, like August is part one, and part two is Via.”

A couple characters were combined into the role of Mr. Brown, and some story telling elements were left out, but the characters were still given the use of their voices, and the narration followed that of the book, allowing each their own chapter, giving the audience a partial view into their worlds. They could reflect and explain their positions and experiences. Point of view is a major theme and while I don’t believe that my daughter understands why this is important, she did enjoy the opportunity to enter that space. The adults don’t tell the story. They guide it from the sidelines and give small glimpses into the struggles that are faced. This is, “…to help the kids learn to accept everyone no matter what. It’s the simplest thing – you’re older, I’m younger. You’re taller, I’m smaller. I think that the whole story is based on learning to accept anyone no matter what they look like or what they eat or how they do stuff. I think it tries to tell people like Julian how to show respect for people like Auggie.”

There are four major points that my child and I took away from the film.
1) Don’t judge a book by it’s cover. Taken further, every cover has a purpose and a reason for why it looks the way it does according to the intention of the artist. “Auggie, to be honest with you, isn’t as bad as I thought. I don’t get how any one could make fun of him. He is perfect the way he is.”

2) You can’t change other people, but you can change yourself. Jack Well, Auggie’s best friend, had some changing to do. Watching him figure this out was one of the most satisfying narratives of the film.

3) Save the evidence. This is the sticking point for me. Yes, the class bully was set straight, but this was largely in part to the attention of the administrative staff at the school combined with the evidence saved bu Auggie. For my daughter, this was the first time she had ever seen the system in action, doing its best to protect the victim. Most of us don’t know what this looks like because we have never seen it happen. I’m not sure it could have had Auggie not kept the evidence.

4) It’s OK to be emotionally touched by a movie – even if you aren’t old enough yet to understand why it touches you.  Please don’t think that watching “Wonder” with your child will automatically instill in them a deep sense of empathy and empowerment. The points seem simple, but when faced with adversity, they become complex. While follow up conversation isn’t always necessary, it can help children understand why the emotions exist and how empathy works in the real world. My only regret after our movie date was that I didn’t stock up on extra absorbent tissues. While I understood why tears streamed down my face for 90 minutes straight (thank goodness I had previously mastered the silent waterfall of tears technique) my child did not. She wiped her face under the dim house lights and whispered to me, “My eyes are watery but I don’t know why.”

Please note all images and media within this article are the property of Lions Gate Entertainment R.J. Palacio and/or the various sources from which they were taken this website and the author(s) of this article claim no ownership of any kind except to the reviews written works this review is for educational and informational purposes only