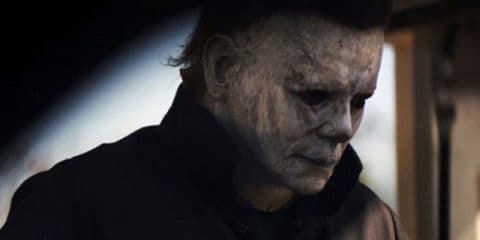 Halloween is a 2018 American slasher film directed by David Gordon Green and written by Green, Jeff Fradley, and Danny McBride. While the eleventh installment in the Halloween film series, it’s a direct sequel to the 1978 film of the same name, while effecting a retcon of all previous sequels. Set 40 years after the original film, the plot follows Laurie Strode as she prepares to face Michael Myers when he returns to Haddonfield, Illinois, after his killing spree on Halloween night in 1978. Jamie Lee Curtis and Nick Castle reprise their roles as Strode and Myers, respectively, with stuntman James Jude Courtney also predominantly portraying Myers. The film also stars Judy Greer, Andi Matichak, Will Patton, and Virginia Gardner.

This movie wasn’t that bad. Like the movie IT part 1, did not scare me. It had abit of tense moments, but for the most part it was just a typical halloween slasher movie. Before you decide thats a BAD thing, it isnt by any means. It was an enjoyable movie, with some good practical effects and REALLY good camera work. The movie starts off talking about the killer, Michael Myers, with two reporters wanting to get more information on him as a person. They quickly show off his mask, and the movie hints to a sort of supernatural element as the other patients and even a dog starts freaking out when its brought close to him. If there is some supernatural element it would explain how he can survive everything he has thoughout the first movie and this one.

Sadly the movie takes a while to actually start with the murder, it focuses on the family of Laurie Strode, their relationship, Lauries fear of Michael, and what her daughter sees as a horrible childhood. I will say that when the killing starts, it goes almost all out. The first few murders are done with amazing camera shots, and there are really well done shots all throughout the movie. The best example is after he gets his trademark knife. The camera gives us a first person view for the killer until we get to the living room window. You see his reflection as he peers in, then the camera holds there as he walks around the back to sneak in, and kill the woman against the same window, stabbing her through the back of the neck. Its shots like that that really make this movie good.

The movie ends with betrayal, which looking back i should have seen coming, and a stand off between Michael and Laurie, the thing she had prepared for since their first encounter. This climax makes it seem more and more like Michael, and even Laurie, are not entirely human. All the damage he has received between the original movie and this, being shot, hit by a car TRYING to kill him, having his fingers blasted off by a shotgun, and brushing it off like its nothing, or at least being stunned/knocked out. Sadly it kind of makes it less believable that he is just a crazy human.

In the end, it was a pretty good movie, and one i may watch again for halloween with friends. I give 7 out of 10 embers, with some proper fuel, this can turn into a decent little fire.